Jackie & Chris were referred by a friend of Jackie's mom, Liz. I had created Liz's daughter's wedding cake as a modern version of her grandmother's 1950's wedding cake. Jackie's mom remembered not only how beautiful the cake came out, but how fresh the cake tasted. Jackie's mom told me it was very important that her daughter's cake have that same, fresh, homemade taste. Jackie & Chris love chocolate, but because of the size of their wedding (180 guests) I included a variety of cakes and fillings so that they could think about offering several different cake flavors. At the tasting & design session, we focused on what the possibilities could be for their cake, rather than deciding on specific cake flavors and a design. It was so much to "digest!" We played with cake styles, and even set up faux tiers to give them an idea of what they would look like standing next to a 5-tier cake in the ballroom of The Ritz-Carlton in Battery Park, NYC.

For her cake design, Jackie wanted to bring in the dress details from her Ines DiSanto wedding dress, using the lace design as a starting point. The wedding flowers used in the bouquets and centerpieces included roses and peonies and would trail down the centerpiece vase.  Using these elements, we came up with a piped lace design with bead detail and shimmer that was very similar to her dress. The crowning touch would be a lush cascade of sugar flowers incorporating the roses and peonies.  To add more texture, depth and delicate qualities to the cake, I suggested the addition of a tulle pattern in sugar behind the lace.  This subtle detail made the cake go from 'wow' to "WOW!"

There were approximately 150 sugar flowers used in Jackie & Chris's wedding cake, including roses, peonies, lisianthus, hydrangea, rose leaves and buds. To assemble the cascade, sections of sugar flowers were wired together first, shaped, and then the open spaces filled in.

To add a bit more height, a custom cake stand of 4" was used, which really added a nice formal touch to the cake. 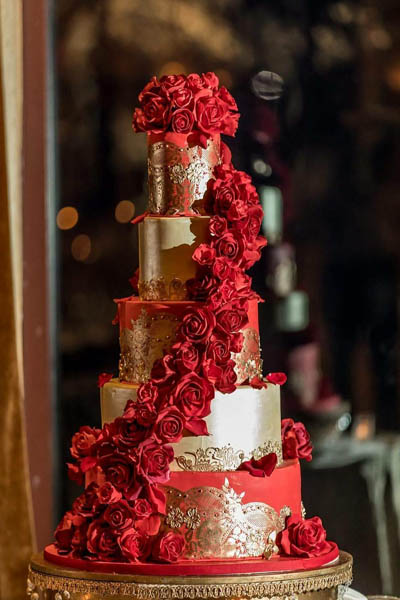 "Thank you for the cake. It was amazing. Everyone loved it!" 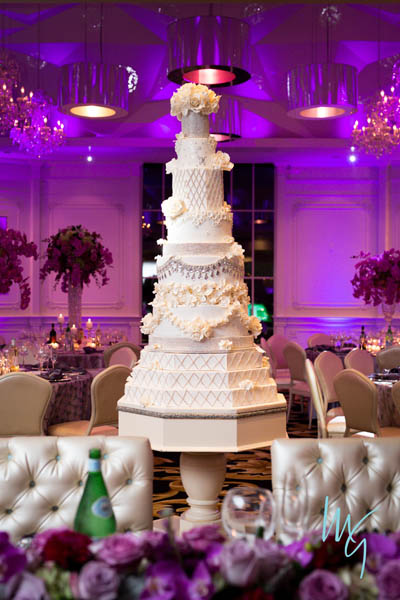 "Wow! The cake was amazing. You did an awesome job. We've been recommending you to everyone!" 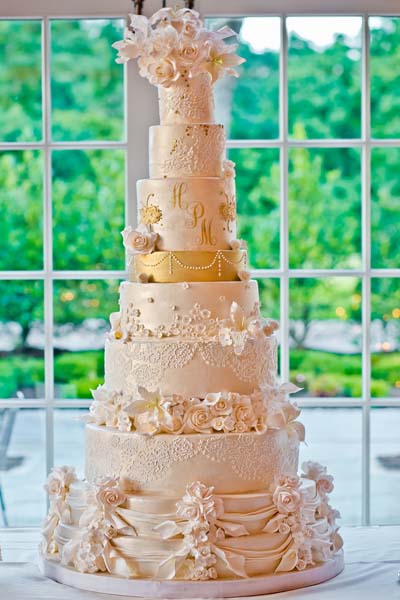 "It was truly a magnificent work of art. The detail was exquisite. Everyone raved about the cake!"